skip to main | skip to sidebar

In April 2005, Alan Jones spent almost an entire week berating, denigrating and vilifying the Lebanese Muslim youth.  I started a complaint against him with the Anti- discrimination Board of NSW.  He took virtually no notice for nearly two years.  After that, the complaint was referred to the Administrative Decisions Tribunal.  The ADT ruled that Jones must apologise in terms mutually agreeable or the ADT would write the words..  He lodged an appeal.  He lost.  He then tried to put a unilateral apology on 6 dec 12, the ADT said that was not good enough and ordered the apology you will hear and read below.  This apology went to air Today, the 19th of December 2012, 7.5 years after the offensive comments and exactly 7 years after the same radio station defamed me personally.

Here is the link to the apology, for some reason, I am unable to upload it: 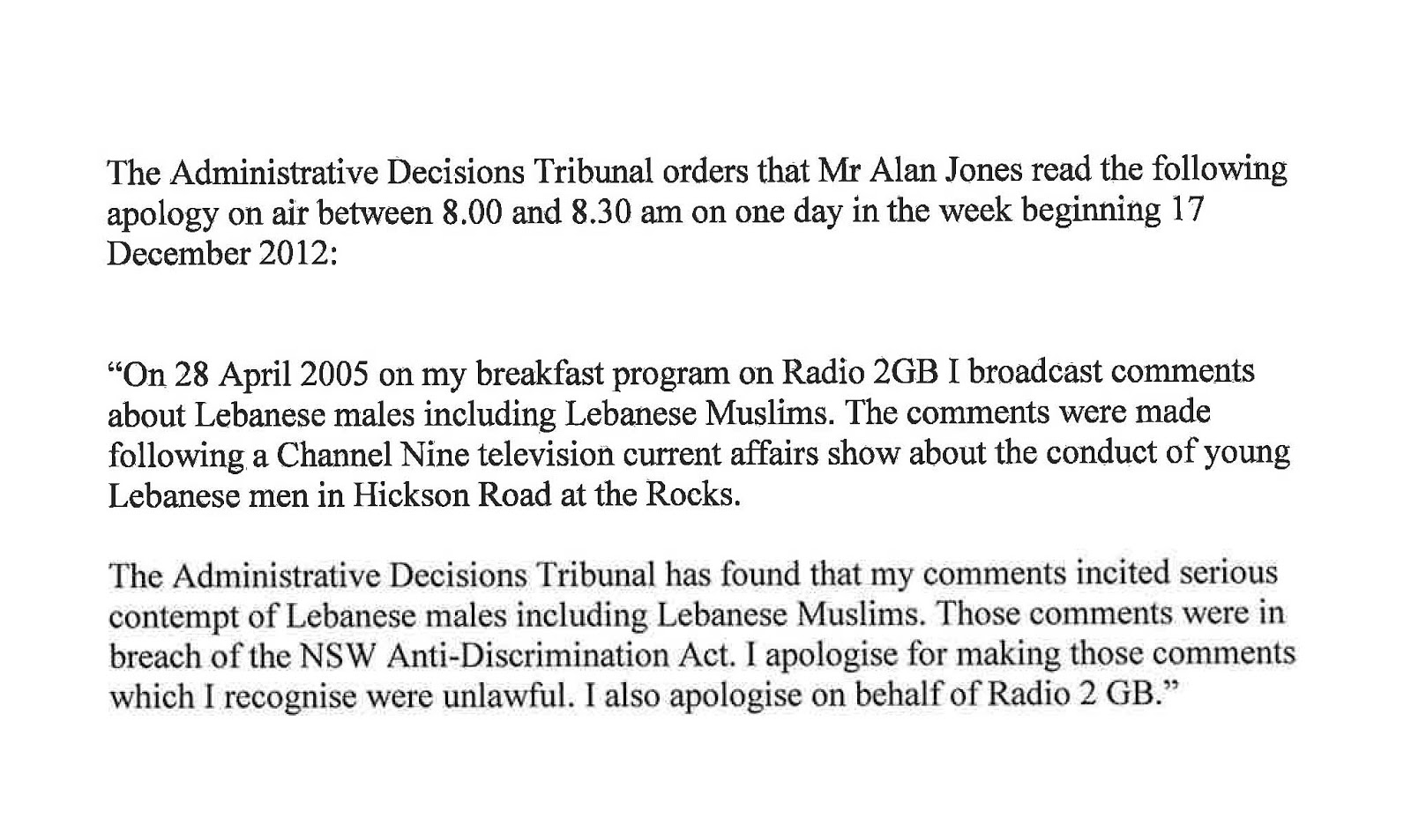 1 – This long overdue apology is the second final step in a grueling endeavour that has cost me and my family dearly over the past 7.5 years, the final step will be the Tribunal’s determination on costs.
2 – Mr. Jones’ vilification of my community has hampered members of my community in their pursuit of employment opportunities and has hindered our access and equity in what is otherwise an egalitarian society.
3 – During the 7.5 year legal battle, radio station 2gb has not missed an opportunity to gratuitously attack me and defame me, I had taken the station to court over one incident, that matter had been appealed by the station all the way to the High Court and is not yet finished.
4 – Our Anti-Discrimination laws are due for an overhaul, a 7.5 year debilitatingly costly action is not the way to protect minority and maintain a satisfactory standard of public discourse in broadcasting in modern day Australian.  Australian society deserves better.  I welcome the Federal Attorney General’s present review of the vilification laws in Australia.
5 – This apology is a win for all Australians, as a member of a minority group, I see this win as part and parcel of protecting Australian society from divisive hate speech whilst at the same time protecting legitimate and responsible free speech.
6 – I am very thankful to my legal team led by Mr. Terry Goldberg of Turner Freeman and Barrister Ms. Kylie Nomchong.
Posted by K Trad at 6:25 PM No comments:

Head of the Imams Council interview re electoral controversy 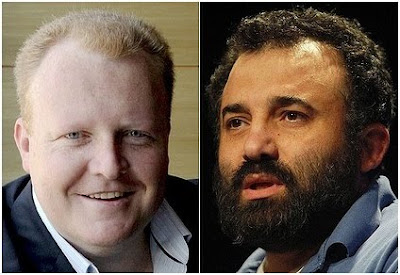 MUSLIM community identity Keysar Trad is not dangerous, disgraceful or a racist who incites people to commit violence, the NSW Court of Appeal has ruled.

Mr Trad, the president of the Islamic Friendship Association of Australia, has been cleared of those defamatory labels thrown at him by 2GB's Jason Morrison and backed by Supreme Court Justice Peter McClellan. Last week the Court of Appeal ruled there was no evidence to support them.

The court found that Justice McClellan had erred in his findings on a number of points in relation to those defamatory statements and has ordered a retrial to assess damages regarding Mr Trad's reputation.

However, the court allowed, in part, a rare defence known as "reply to attack", on some points relating to the counts. Mr Trad is considering appealing in the High Court.

The chief operating officer of 2GB, Stuart Thomas, said the court found that 2GB was only defending itself and allowed the reply-to-attack defence in five out of eight points.

The radio station was considering whether it would also appeal the remaining three points to the High Court, he said.

The case stemmed from the aftermath of the Cronulla race riots in late 2005 when Mr Trad spoke at a peace rally at Town Hall and criticised the role of the media, in particular "tabloid journalism and one talkback radio station".

Mr Trad's said the station was "whipping up fears" and Muslims were "suffering as a result of the racist actions of predominantly one radio station".

A 2GB reporter was at the rally and Mr Trad's comments were broadcast. Mr Morrison, who has since switched stations to Fairfax Media's 2UE, launched a scathing attack on Mr Trad on radio the next day. He said Mr Trad was a "disgraceful and dangerous individual who incited violence, hatred and racism".

Mr Trad sued the station for defamation and in 2007 a jury agreed that Mr Trad had been defamed by Mr Morrison.

However, at a subsequent hearing Justice McClellan ruled against him and gave a judgment that criticised Mr Trad's role over the years as a spokesman for the Lebanese Muslim community. Judge McClellan found that most of Mr Morrison's statements about Mr Trad were true.

The three Court of Appeal judges set aside the orders by Judge McClellan and sent the matter back to the court to assess damages. Harbour Radio, owners of 2GB, were ordered to pay half of Mr Trad's appeal costs.

The purpose of this blog is to address published misrepresentations about me or organisations with which I am associated or about Islam.

I have come across a number of misrepresentations about me, some of these have appeared on Wikipedia and some in other places.

The policy with this blog is to address those controversies that have come to my attention and which I feel are big enough to warrant the posting of a response.

There are four major points that have been brought to my attention, I will address these and others as I become aware of them.

I will not address matters that have not been published.

I will address older controversies as time permits.

I will also touch on matters relating to Islam in General if I feel the need to do so, however, such matters are more likely to be addressed in different forums.
Posted by K Trad at 12:45 AM No comments: